I was five when the first “Star Wars” movie was released, eight when “The Empire Strikes Back” came out, and 11 when “Return of the Jedi” hit theaters. My parents let me watch those latter two films on the big screen, but kept me home for the first one.

Now, some three decades later, I am asking myself the question a lot of parents this month are raising: Should I take my children to see the newest film in the franchise, “The Force Awakens”? And … will they have nightmares for a year if I do let them go?

If you want the spoiler-free answer – or at least this traditional parent’s take on it – then keep reading.

I watched “The Force Awakens” with a critical eye on opening day, and after talking with a few other parents in the theater lobby, came to this conclusion: I would not take a 3- or 4-year-old kid to see it. I might take a 7-year-old to watch it. I would take a 10-year-old to see it – that is, if the kid is discerning.

My oldest children are 7 and 3 (nearly 4). I know this film would terrify my almost-4-year-old son, and there are a few scenes that potentially could give my 7-year-old son some bad dreams. But I am considering taking him to it, with the understanding that I need to shield his eyes in at least two specific scenes (both involving Kylo Ren). 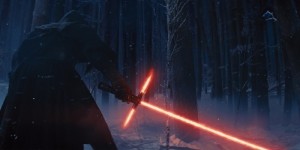 Of course, every child is different, and you may have a 6-year-old who is mature enough to view it with no problem.

But it is rated PG-13 for a reason. Comparing its violence and “scary” content to the other films, it is less violent and less scary than “Revenge of the Sith” (PG-13) and at least as violent and scary as “Return of the Jedi” (PG, but likely would have garnered a PG-13 if that rating had existed). If your child handled “Return of the Jedi” with no problem – even the spooky Emperor-Luke-Darth battle at the end – then you’re probably fine. But if not, then you may want to keep the kids home. “The Force Awakens” is more violent and more scary than the first “Star Wars” film and “The Empire Strikes Back.”

Similar to the original trilogy, the violence in “The Force Awakens” is mostly bloodless, and it’s largely absent any coarse language (I counted two h—s and one d—ns, all used by Finn). And it’s (obviously) also void of sexual content, with not even a kiss on the lips.

I’d love to provide more details, but I did promise a spoiler-free overview.

If I do end up taking my 7-year-old son, then we will talk not just about Han and Leia and Chewbacca, but we’ll also discuss the “Star Wars” worldview, and how it’s a make-believe God-less universe that may be entertaining and fun to watch, but definitely is not to be emulated. We also may discuss how it borrows from false worldviews, including Eastern mysticism and Buddhism, and how something that “surrounds every living thing” may make for a good movie, but biblically is pure hogwash.

After all, a worldview that deviates from Christ, Truth and the Bible is far, far scarier than anything he’ll see in the theater.

Foust is the father of four young children and has covered films for more than a decade. Visit his blog, MichaelFoust.com