“Raindrops on roses, whiskers on kittens”… For some reason, the song “My Favorite Things” is not only a timeless show tune, but it’s also become popular during the Christmas season.  When trials come, like bee stings and bites, the singer reflects on her favorite things.

I can’t help put think that little boys prefer stomping on bees instead of rhapsodizing about potential pain. But little girls enjoy all the magical imagery. And then they grow up. But some things never change. 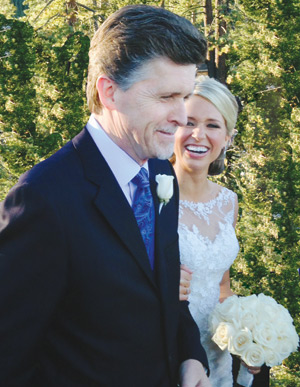 As I walked my daughter Kristin down the aisle at her wedding recently, these kinds of songs were bouncing around in my noggin. They were all coming back to me, those tunes from her childhood that we would sing and play over and over.

Each mental note brings reminders of that simpler time when my little girl was such a bundle of energy and music. She still is, of course, but my brain keeps racing between then and now.

Flashbacks to the days of Barbie dolls and “My Little Pony,” leading to real ponies and bigger horses. Then there were those father-daughter trips and all the other things dads try to do with their children.

The wedding ceremony was simple and beautiful, in God’s Big Cathedral—that is, under a clear blue sky, crisp autumn day, on a large pier hovering over spectacular Lake Tahoe.

Everything went along so smoothly, following the precise steps we practiced at the previous day’s rehearsal. I am prone to deal with stress by cracking jokes; I found that’s not the best thing to do when wedding ceremonies are involved.

Daughters know exactly what they want and during the process they prefer dads just keep the mouth zipped,and write more checks, of course. Just listen to the wedding planner, Dad.

When the big timemoment came I did follow instructions properly, but still tried a little humor while slowly pacing down the aisle, mainly to keep her calm. Right before our cue to move, she had said she was so wound up she felt like passing out. Months of anticipation had built to a tipping point. My plan: Make her laugh and she’d keep breathing and standing. I didn’t want to see her fainting and dragging both of us into the gorgeous, but cold, lake.

It worked, and now as Kristin reviews her zillion wedding photos she wonders why it sometimes appears that my mind is elsewhere. When I’m not breaking the ice with wisecracks, she will know this: I was hearing those songs, those lyrics.

Even lines from crazy kids’ songs I’d play on the cassette in our family van when it was my week to drive the carpool. It was widely observed that our vehicle was bouncing and kids were extra-wired by the time we got to school.

Making their own way

Children all grow up way too fast, and in our family Jeff, Brandon and Kristin make us proud every day. They are strong, independently minded adults now, thank God.

As I said at the wedding reception, the last time my daughter did exactly what I needed her to do (like “Get into bed and go to sleep, Peanut”) she was 3.

As the evening moved on and it was time for the after dinner “Dad and Daughter Dance,” we couldn’t help it. While the unconventional Led Zeppelin song “Thank You” played, we began slowly and respectfully, then I think both of us suddenly heard all those other tunes in our minds, all at once. The music had sweet lyrics as we burst into a zany combination of every goofy choreography move we ever did in the family living room. Total “Spazz Dance” antics, puzzling to many, perfect as we saw it. A life medley.

Then the song was drawing to a close as I whispered, “Put your feet on my feet and follow my lead, like we did when you were a little girl.”

Ah, the memories. She was so little then, and now tall, slender and beautiful. And this time, our soundtrack was syncopated to my groans of “Ow, ouch.” Time flies. We get all get older.

But the melodies always linger on.

Larson is a longtime Southern California radio/television personality. His voice is heard on KPRZ 1210AM, and his weekday talkshow airs 6-9 a.m. on KCBQ 1170AM. He is also a news analyst on KUSI TV. Learn more at www.marklarson.com.