It’s winter, but you’d never know it by looking out my window right now. I read about winter storms, mountains getting snow, motorists stranded, power outages, and yet all of those reports are from places where winter really means something.

All winter means in Southern California, where I live, is that the days are shorter and the stores are playing Christmas music. The sky is still blue, surfers are still in the water, people are still wearing shorts. They may have added Uggs to their feet, but it’s pretty nice out.

Just the fact that it’s winter, though, takes me back to my days in Minnesota, where I grew up. And when I think of winter in Minnesota, I think of playing hockey. We played mostly on outdoor rinks, so we would put plastic bags over our feet before we put on our skates, and put examination gloves from a doctor’s office on our hands before we put on our hockey gloves. Not until high school did I have the glorious experience of playing in an indoor rink.

One particular post-game night still stands out, and I always think about it when winter arrives.

After a hard-fought game (is there any other kind?) at the Metropolitan Ice Arena outside of Minneapolis, I climbed into my dad’s station wagon, exhausted but exuberant. The high school team I played on had just beaten a cross-town rival. I was giving our goaltender a ride home, and for the first several minutes in the car all we could talk about was the game.

It was a January night in Minnesota, which meant that it was very dark and very cold. I eased the car onto the freeway, and we continued our recap of the game’s highlights.

Suddenly the goaltender said, “Have you noticed that all of the headlights up there are coming toward us?”

I quickly focused on the road, and realized I had pulled the car onto the highway going the wrong way. I yanked on the steering wheel and swerved into the median separating eastbound traffic from westbound. The car then sank in the deep snow.

My teammate and I crawled out and headed for an exit so we could call for help—this was before cellphones. The car was hopelessly stuck.

The highway patrol officer who came to the site berated me for my carelessness, and continued to marvel in a not-very-convincing tone that we had not been drinking. The tow-truck operator did not hide his irritation at having to crawl into the snow under the car to attach the towing cable to the frame.

But these comments from authority figures did not concern me nearly as much as what I anticipated my dad would say. He was at a dinner party, and I needed to call him from the highway patrolman’s car. My dad arrived just as the car was being pulled out of the snow and pointed in the right direction.

We stood, silent, in the middle of the cold highway. The goaltender, wisely, stood a ways off, shivering.

“How am I going to get home?” I asked my dad as I handed him the keys.

“You’re driving. You got on the wrong side of the highway. It’s not very clearly marked. I’m surprised more people haven’t done it.”

We stood for a while longer.

I didn’t care about the hockey victory anymore. This was a new level of exuberance. In spite of the ditched car, my dad saw something. The value of another chance? A grace moment from his own past? All I could feel was acceptance, love and gratitude.

This is how God sees his creation. He likes what he sees. He sees himself in it. And the delight that God takes in his creation draws us back to him.

It’s winter on the calendar. But it’s warm where I am right now. 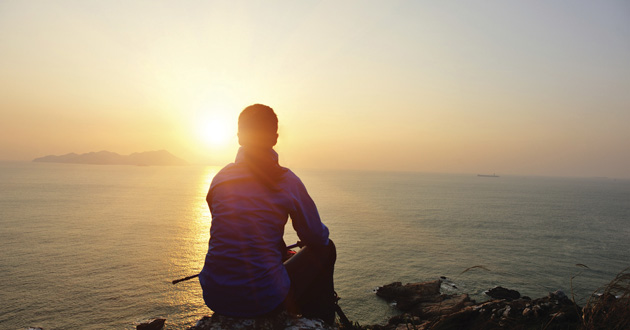