During her 27 years behind a San Diego anchor desk, Kimberly Hunt has covered sitting presidents, interviewed high-profile celebrities like Oprah Winfrey, covered the Oscars live and helped viewers navigate the ravaging firestorms of 2003 and 2007, but her favorite assignment? Mom.

“I think it’s like any other mom,” Hunt said in an interview in her Del Mar home. “I think ‘The Mom’ part of you is not at all affected by anything else that affects your life or what you do for a living or the fact that someone may watch television in the evenings and recognize my face as a news anchor in town. When you turn to the other part of your life, which is wife and mother, the mother part, that just plays no part in your relationship. It only affects your schedule.”

It’s been a crazy schedule.

Since coming to ABC affiliate KGTV from a Monterey, California station in 1987, Hunt has anchored the nightly news. She stayed at Channel 10 for 15 years, co-anchoring with her long-time friend Carol LeBeau before heading to KUSI in 2002. She returned to Channel 10 and LeBeau in January 2008. LeBeau retired in 2009.

Hunt’s evening work duties meant she was not home when daughter, Savannah, got from school. She was also in the studio for sports practices, homework and most weeknight dinners. Those duties, she said, were masterfully orchestrated by her husband, former San Diego Chargers linebacker Billy Ray Smith. After his 1992 retirement from the NFL, Smith became a sports broadcaster, working the morning drive time as part of The Scott and B.R. Show.

“It worked out perfectly for a parent, mother or father, always being with Savannah,” Hunt said of her now 23-year-old daughter. “We never had to have any kind of substantial day care other than the occasional person that helped out when we wanted to do something or had an event.”

The schedule meant that Hunt would catch about five hours of sleep after getting home around 12:30 a.m. Smith would head off to his station by 4:30 a.m. Hunt was up an hour or so after that to spend time cooking breakfast with Savannah before driving her to school, a ritual that continued until late into high school when the teen insisted on driving herself.

“My sleep didn’t matter,” Momma said. “That was the only thing that suffered. Time with her didn’t suffer.”

When school ended for the day Smith would pick her up and take her to volleyball practice. He helped her as needed with homework and any other school-related tasks. For dinner, he would pull out carefully packaged meals that Hunt prepared and labeled several days in advance.

“It makes all of the difference in the world because she couldn’t be in better hands than Daddy when I’m not home,” Hunt said. “He did a fantastic job.” 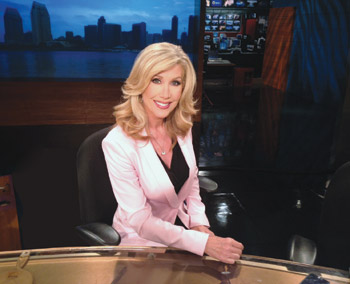 The routine also complemented each of their interests. Hunt was able to instill her affinity for health and nutrition; Smith was able to pass on his passion for sports and even coaching (when it came to homework).

Several nights a week Hunt tried to arrange her schedule so that she could drive home to share a meal with her family, something that current work demands wouldn’t allow now.

“It was like God kind of oversaw that being manageable and, about the time she went off to college, I really wouldn’t be able to come home to dinner like I did back then,” she said.

The weekends were devoted to family time, often attending Savannah’s games. They also frequently did charity work together. As a high-profile couple, they have received thousands of requests to emcee fundraisers and benefits. Their commitment to charity work came naturally, as the couple first met while co-hosting a United Cerebral Palsy telethon in the late 1980s.

“He invited me to lunch and we never stopped dating until we were married,” the newscaster said.

The couple will celebrate their 25th wedding anniversary in June.

“Everything we do charitably is a decision we make on our own time or as a family,” she said.

“It’s a lot when you work five nights a week,” she said.

Her charitable work has benefited, among others, the San Diego Rescue Mission, Burn Institute, Mama’s Kitchen, Room to Read, and Opportunity International.

After watching her parents model the giving spirit around San Diego,

Savannah traveled as a young teen to Vietnam with her mother, where they worked on a school library project for underprivileged children.

After returning from the trip, Savannah started her own charity, raising money to help poor families furnish their homes. She also helped with tutoring. For her 16th birthday Savannah raised $20,000 for Opportunity International after asking her friends to give to the charity in lieu of gifts.

Although Hunt has enjoyed her volunteer work with the various social agencies, her heart is particularly close to those benefiting various law enforcement organizations, which she supports as a tribute to her father Harry Hunt, a retired investigator with the California Highway Patrol, and her grandfather, also named Harry Hunt, an Ojai Police Department constable who was killed in the line of duty in 1943.

“I could not have seen a more committed work ethic,” Hunt said of her father, who lives in Napa, where he and his wife, Vesta raised Kimberly and her two siblings, Glenn and Debi. “I have a hardworking, trust-worthy, loyal, good father.”

Early on, Hunt adopted that same work philosophy as her own, a trait also exhibited by her husband.

“You make do with the small connections and the every couple of nights me dropping in for dinner until you can get to the weekend,” she said. “I was thinking that I was just fortunate that life was working out this way.”

In addition to the strong work ethic, Hunt credits her mom and dad with modeling the skills that she, in turn, used to parent her own child. At the center of it all, she said, is an enduring faith.

“They are so lovely how they go together,” she said. “They are two people of faith, integrity and character and joy. They are always there. They have never in my life, ever, not been there when they’ve needed to be.”

Her dad provides the sound spiritual foundation, while her mother complements that with sheer strength.

“When something happens that rocks my world and I know, ‘OK this isn’t good news,’” Hunt said that’s her cue to call home.

“My father cries and my mom is a rock, like a ROCK, but a positive rock. (With) my mom this positive comes out with this strength. My dad has to cry that someone hurt me. Once he pulls himself together then he goes to the Bible and then he gives me the verses: protection, blessings, overcoming, persevering, plans for your life.”

In many ways, the mommy instinct was passed on from her own mother; their closeness revealed through Hunt’s own misting eyes.

“I learned everything, everything (from her),” the journalist said. “I couldn’t have ever had a more loving, giving, generous, honorable, selfless, gracious, beautiful, faith-filled mother.

“Faith plays a role in everything that has ever been a part of my life. Every decision I ever make, every reaction I have to news, every person I choose, the way I raise my daughter, how I navigate change in life, the unexpected bumps in life. It affects everything.”

It’s a way of life that was cultivated even more with the shared values of her spouse.

“I will say having that mirror as a husband is invaluable because I think that, clearly, if I hadn’t had a husband all those years that was that kind of a person and if I had someone who wasn’t that, it wouldn’t have worked.”

Their faith also provided a grounding that helped to temper some of the pitfalls that can come to children of high-profile parents.

“I feel like the minute we walk in that door that doesn’t exist anymore,” the newscaster said of their public jobs. “She was raised in a conservative home, two parents with standards and expectations and love and support.”

Hunt said that fans of their work frequently inquire about Savannah and have been particularly kind to their family, often greeting them while still maintaining appropriate boundaries.

“It’s been a wonderful blessing not only for us, but for Savannah,” Hunt said. “They have cared about her because they have heard about her through us and knew we had a daughter and they are just caring and wonderful.”

Hunt said she believes the strong familial foundation, faith and a network of girlfriends who provided another layer of role models for Savannah helped to shape her into a self-motivated young woman who is now working in New York City’s hotel industry after graduating earlier this year from Cornell.

Two years before graduating from high school Savannah had already set her sights on the university in Ithaca, New York, the only college to which she submitted an application. In preparation for the application process Savannah researched all of the entry requirements and determined extra steps she could take to improve her chances of begin accepted, including landing a job in a field related to her course of study. Before she completed high school she had already visited Cornell three times.

“She’s always learned how to and always wanted to learn how to figure it out herself,” her proud mom said. “It’s her responsibility and we’re here to be parents and to assist and do what parents do.”

Savannah’s elation at earning admission to Cornell served to cushion her mom from the trauma of empty nesting.

“I helped her move into the dorm and there was nothing but excitement,” Hunt said. “Every girl and boy that came in and met her, the freshman orientation, every professor we met, the building we walked into and the grass we walked on. She was absolutely so beautifully happy and excited and doing what she wanted to do.

“I’m removed from that now. Now, do I boo-hoo that she’s not home with me? If she had been home with me, that wouldn’t have worked out for her. That’s what she wanted. So when I came home I just lived in her excitement.”

Although her motherly role of mom has adapted with time and Savannah’s own personal development, Hunt said she’s still proudly mom. Thanks to cell phones and texting, they are only a moment away from each other. In early April Savannah was home to celebrate Easter with her parents.

“I feel like I’m like all the moms,” she said. “We love our kids to death and there’s nothing that brings us more joy in this world and we work hard for them and we protect them and we try to teach them and we try to let them grow. We try to be there for them during their ups and downs. I just feel like that’s kind of collectively what we moms do.”