Craig Griffin had been there before. He was more than familiar with the sprawling grounds, the asphalt walking track with the dirt center, the double chain-link fencing. Beyond the housing units the fences crested at 20 feet, with razor wire wrapped across the apex. For good measure, the fencing was electric in case any of the residents got the wild idea to cut their way through to the outside. Guards, armed with rifles, stood sentry throughout the yard and atop towers along each building.

Griffin’s first three-year stint at the Richard J. Donovan Correctional Facility was in the mid-1990s, after he was busted stealing to keep up with his cocaine addiction.

The second term, also at the Otay Mesa prison, was in the year 2000. Once again, he was caught stealing to buy drugs. Same crime. Same prison. New reality. With his marriage already in ruins, Griffin discovered he had also alienated everyone else in his circle.

“It seemed everyone I knew, family or friends, washed their hands of me,” Griffin said. “Even the people from church where I’d been for 15 years didn’t respond to my letters. No one did, and rightly so. I had hurt and devastated so many for a second time.

“The feeling of being so alone was pretty overwhelming and I think that time was a time I really understood who I hurt, what I had become. It’s a cold revelation when you wake up to all the destruction you caused.”

So there he stood in the prison yard, scanning his fellow inmates, though many of the 800 or so faces had changed since his first trip. His previous contempt for them melted away.

“I remember looking around at all these inmates dressed in blue, and the most hopeless, lost, lonely feeling overtook me,” Griffin said. “I realized I was one of these guys, an inmate no different from them, and there was no way out of that prison or the drug use. I knew when I got released I would end up back in that place, totally helpless. (It was) the most desolate, hopeless feeling and I had no way out of it.”

His transformation came the way many do, by way of a simple invitation to church—though this one was behind bars.

“I kept hearing the pastor say ‘You are forgiven. God forgives you,’” Griffin said.

The long-time churchgoer had an epiphany.

“I got on my knees in a prison cell and asked God to forgive me for all the mess I made,” he said. “I was always around church my whole life, but there is a big difference between knowing God exists and having a relationship with Him.”

Broken bondage
His May 5, 2001 jailhouse conversion brought his first sense of freedom, despite being incarcerated.

“The first time I really didn’t cope well then,” Griffin admitted. “I walked around the prison yard wondering if I should take my life. Everything was so dark. Just despair. Even the sunniest day in there would just be dark to me.” 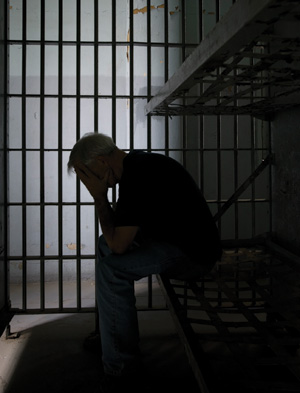 Freed from the bitter weight of unforgiveness, Griffin said he was finally able to gain perspective on the vicious cycle of his old life, which began by self-medicating before he was even a teenager as a way to cope with a “crazy family environment where both my parents drank and fought all the time.

“I found drugs to be a medicine that temporarily worked to ease my inner turmoil. But they really just made the turmoil worse.”

The pattern continued until Griffin was 34.

“I kept returning to periods of extended drug use, primarily cocaine,” he said. “I would try to clean up for a few months, but would always return to the drug. It was madness, just a crazy downward spiral.”

After discovering that a life with Jesus was more about relationships than rituals, Griffin slowly set about restoring his own relationships, beginning with his children.

“After two years, one by one, my children began to write,” he said. “By the time I was released God had restored those relationships. My children are with me and stand by me today. Amazing thing that God did.”

Building bridges
That power of redemption prompted to Griffin to launch a monthly prison newsletter called BridgeBuilders, which encouraged dads to begin reaching out to mend their broken relationships with their children.

After being released from prison 11 years ago, Griffin tapped into that same concept when launching his Grace Builders construction company, which today employs seven full-time and six part-time workers.

“When I got out God put on my heart that building people was just as important as building projects so that’s where the name came from,” he said. “When we do a project our goal is to of course build the job, but also build the client.”

Nine years ago Griffin remarried; between the two of them, he and Barbara have six children and six grandchildren.

“I’m not on this earth for me,” the contractor said. “I’ve been given gifts to use while I’m here to strengthen and encourage others. God put those gifts in me and every day is an opportunity to use them for Him and for others.

“I still waver and distrust everyday, I have to constantly remind myself that God is present. God is with me and watches me, and God knows what He is doing. But I also learned He has given me enough faith to trust Him and believe Him.”

Even as Griffin continues to learn just how powerful God is, he is amazed at His grace and mercy.

“Without God this stuff is impossible to overcome,” Griffin said. “It’s too big, too deadly. It has to be handled by God Himself. Only He can break an addiction, remove cravings from a mind. Only He has the power to break it—and then to keep you from it.

“As years go by, He keeps getting bigger and stronger and I keep getting smaller and weaker. I have a great reverence for Him. He overlooks so much of my messes each day, and still loves me and showers me with such great blessing. He really is amazing.”

Vital partnership
At the same time, though, he sees his relationship with God as a partnership. In the end, it was up to Griffin to take the needed steps to reclaim his life.

“Never give up,” he said. “Always keep trying. If you fall down, get back up and face God and try again. Don’t ever quit. God never quits on you. If you think you can’t face God because you’ve messed up, remember He is always facing you, always willing to take you back, always willing to forgive.”

Just as Griffin is careful to measure every construction cut he makes, the former addict said he’s discovering that his Creator is just as exacting in measuring—and meting—out what his children need.

“I know more about that now than I did then (in prison),” he said. “God put everyone on ‘hold’ so he could get me alone and speak to me, and be my God. No one had really left. I understand how important it was to be alone then, so God could change me.”