Thirteen months ago, as families across San Diego County were preoccupied with the trappings of Christmas, law enforcement officials interrupted the season of light with the reality of the region’s dark underbelly after announcing the infiltration of a national human trafficking ring.

More than 20 gang members were arrested in the joint operation, which was based in Lemon Grove and Spring Valley.

In addition to the arrests, Operation Stolen Souls was able to identify more than 100 victims, several as young as 12 years old. Many of the victims were recruited on local school campuses, either by pimps called recruiters or experienced, high-ranking prostitutes, with false promises of a luxurious lifestyle. They were then kept in the sex trade by intimidation, physical abuse, threats of violence or being plied with alcohol or drugs. Some of the victims were “branded” with gang tattoos; some were trafficked as far away as Kansas, Michigan and Texas.

The undercover bust was no surprise to Kim Jones, an East County mom who began volunteering with several human trafficking programs in 2013, but the discovery of the trade’s tendrils into local schools unnerved her.

“It was that moment that I realized this is happening everywhere … and right next door,” she said. “It upset me, but it also compelled me. This is happening to girls of all races, all socio-economic status, all family backgrounds. While some girls are certainly more at risk—runaways, foster kids, kids without a strong family structure—every child is a target.”

It wasn’t too long ago that Jones, like many Americans, believed that human trafficking was something that only happened overseas.

“I had no idea that human trafficking happened in San Diego and that survivors lived in our community,” said Jones, who was hired in October as the program director for the Center for Justice & Reconciliation at Point Loma Nazarene University. She came on staff after volunteering with the group for several years. The Center for Justice & Reconciliation addresses a variety of social issues by researching and studying topics of poverty and oppression, then working to create solutions through faith-based dialogue and social engagement.

“I’m a great example of how anyone can get involved,” said Jones, a PLNU alumna. “When I found out that the Center for Justice & Reconciliation was actively working on the community’s anti-trafficking efforts I made a call to offer my help.”

With her background in marketing, special events and fundraising, CJR was eager to put Jones to work.

“CJR needed help in all of these areas,” she said. “It’s the perfect example of when your gifts and talents match up with your passions—and to do this work in a place I love and respect like the university makes it even better.”

Jones’ interest in human trafficking was originally piqued after a friend told her about the work of Generate Hope, a San Diego-based ministry that operates a safe house and other programs for survivors. Jones now volunteers with the Generate Hope.

“I have a teenage daughter and I thought of girls her age who were forced into the sex trade and I knew I had to do something about it,” she said.

After undergoing training in interpersonal relationships with Generate Hope, Jones volunteered as a mentor to a trafficking survivor.

“Each survivor has such a unique story and a difficult past to come to terms with,” Jones said. “Every person deserves dignity, respect and compassion as they seek a new life.

“I found the best thing I could do with the woman I mentored was spend my time with her. I let her tell me the pieces of her story that she wanted me to know. I shared my life with her, prayed with her, took her places—like a walk on the beach or a movie—and just tried to communicate to her (that) ‘You matter to me, you have value and you are loved.’”

At the core of what the center does is research, which helps them to understand the scope of the issue and identify possible solutions. In October, the center released an eye-opening study that found that human trafficking in San Diego has created an $810 million underground economy. Additionally, they found that the region has between 8,830 and 11,733 sex trafficking victims/survivors a year.

“We were surprised at the scale of sex trafficking going on in San Diego, and the scale of the income,” said Jamie Gates, M.Div., PhD, the center’s director and a co-researcher on the project. “We were also surprised at how wide a range of methods are used to exploit other people.”

The study included interviews with educators from campuses throughout San Diego. All of them, Jones said, “reported some sort of recruitment or victims in their schools. The results of the research did not specify any particular schools, because we wanted to be very careful to not call out a particular school. No school wants to be knows as a recruiting ground for sex trafficking.”

While schools have become a new hunting ground, teen runaways still remain at a high risk.

“Statistics show that runaway teens have less than two days before they are likely going to be approached by a pimp or a recruiter, and foster kids are extremely vulnerable to being trafficked,” Jones said.

Recruiters are not only well-trained on scoping out vulnerable young girls, but they have developed nuanced skills that make these teens easy prey.

“I heard a story of a recruiter who said that when he saw a girl at the mall he would say hi and tell her she was beautiful,” Jones said. “If she looked him in the eye and responded he moved on. If she looked down and did not make eye contact he knew he had met a potential new ‘girl.’ Many recruiters today use the guise of ‘boyfriend’ to lure in the victims.”

In addition to developing solutions, the center works to educate the public about the complexities of human trafficking, including countering myths and preconceived biases. The most pressing, Jones said, is how the public views prostitutes.

“We are trying to change the language from prostitute to victim or survivor,” she said. “Think about it. Who gets up one morning and decides they want to be a prostitute? There are forces that drive victims to this place. I’ve met victims from all walks of life. All races. All socio-economic backgrounds.

“The reality is that most women who are selling sex are doing it under force, fraud or coercion—or they began that way and now they cannot see a way out.”

Because of San Diego’s proximity to the border—and its consistent ranking as one of the top human trafficking regions in the country—multiple agencies have begun working together to combat the crime. In 2011, the San Diego County Regional Human Trafficking and Commercial Sexual Exploitation of Children Advisory Council was formed in 2011.

“Communities all over the United States are watching what we are doing, and even representatives from governments all over the world are brought to San Diego to learn how we are working to combat trafficking in our region,” Jones said. “We have come together in a powerful way with law enforcement, prosecution, child welfare, direct services, education, community organizations and more working together to change the trajectory.”

In addition, the FBI conducts annual Operation Cross Country stings, which as of last October, resulted in the rescue of more than 4,800 children and the conviction of 2,000 suspects nationwide, including at least 15 life sentences since the program began in 2003.

Some of the local busts have been brought about by trained school officials and parents who spotted the signs of trafficking and called law enforcement.

San Diego’s broad-based coalition includes numerous churches that have created their own outreach ministries, with some participating in Churches Against Trafficking, a network that rotates monthly meetings between North and East County. The group involves more than 50 churches, ministries and parachurch organizations. CAT is committed to raising awareness, promoting organizations combating the crime and offering encouragement and prayer.

A practical initiative undertaken by the churches, Jones said, is helping required businesses to comply with the posting of state-mandated human trafficking posters.

“Many of these businesses don’t know or don’t comply and church members all over the county have visited local businesses to give them copies of the poster and request that it be posted,” she said.

He said it was the work of churches that helped secure the passage of the Victims of Trafficking and Violence Protection Act of 2000, a federal law designed to combat the sex trade, slavery and involuntary servitude.

“As long as there are people who buy sex we will have a problem,” Jones added. “If we can be brave enough to talk about it in our churches—to educate people that when they buy sex it is not without a victim. The person is likely trafficked and under the thumb of a trafficker who is controlling them.”

Churches can also assist by providing donations to ministries or organizations that are actively working to stop human trafficking.

“What if every church would adopt one of our local agencies and provide the very needed resources to help survivors find a new way of living? That would be powerful,” Jones said.

“We also need to look within our walls. Kids in our own congregations are at risk. We need more foster families who will take in and nurture high-risk children and we need to pay attention to the recruiting that is going on right under our noses.” 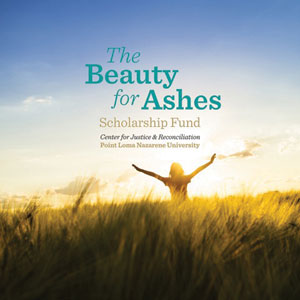 In addition to promoting practical efforts to help such as the poster project and recruiting Christian foster parents, PLNU has created it own niche by developing Beauty for Ashes, a new scholarship program for victims of sex and labor trafficking. The idea came from a survivor who shared her story for the first time during a meeting of sociologists. During her presentation she said her dream was to finish her degree.

“(It) started as a dream with a few of us who were considering how PLNU might be involved more deeply in the work to help survivors find a new life,” Jones said. “We’ve been talking to survivors from all over the world. You can imagine the kind of tenacity it takes for someone to pursue a university education. We’ve been amazed at the resiliency of the survivors we are talking to who are currently considering applying to the university or are in the application process.”

The first Beauty for Ashes scholarship recipient at PLNU will begin attending classes in January, which also happens to be national Human Trafficking Awareness Month. It is believed to be the first scholarship of its kind in the country.

“We knew that if people had the opportunity to be a part of something like this that they would respond,” Jones said. “We were excited, but surprised, by the national media attention the scholarship received. It obviously hit a nerve with people. I think it truly signifies hope.”

That hope, she said, is dependent upon a multi-faceted community-based approach.

“This is a dark issue,” she said. “And it’s a complex one, too. There are no easy answers, and when you look at both labor and sex trafficking it intersects with all of us. From the products we buy, to the way media portrays sex, to the fact that in the church we don’t talk much about the demand for buying sex. We all have a role to play in changing this story.”