The flood of Middle Eastern migrants streaming across the Hungarian border has divided the country’s Christians as well as its political leaders. While some support the government’s attempts to keep migrants out, others see the would-be refugees as an opportunity to share God’s love with people in desperate need.

The migrant crisis exploded in early September, when thousands of people on their way to Germany and Austria got stuck at Budapest’s Keleti train station as part of a government crackdown designed to discourage others from traversing the country. The situation at the train station was “chaotic” and conditions were “terrible,” recalled clinical psychologist Evan Parks, an American who works with missions and NGO groups in Hungary.

But many Hungarians tried to help alleviate the suffering, said Pastor Phil Metzger of Golgota Budapest, a Calvary Chapel congregation.

“Christians responded in big ways and so did a bunch of non-Christians,” he said. “In fact I’d have to say it was ordinary citizens who were the real heroes. I think a lot of churches didn’t know what to do so they did nothing. As a result I believe they missed one of the major defining moments in Europe’s recent history.”

Some media outlets, including NPR, pounced on what they called the church’s “conspicuous absence” in relief efforts. Metzger admits some congregations felt the migrants had no right to come into Hungary and so did nothing to help them. He called that reasoning “flawed logic,” and noted those churches missed a perfect opportunity to share the gospel.

Metzger, an American missionary, and others from his church went to the Keleti station as well as camps at Roszke and Horgos to minister to the refugees.

“We have to understand that refugee ministry means giving a cup of water when asked,” he said. “This opens doors like crazy. We went out there to preach the gospel to a group of people all of us Christians have been praying for, for a long time: Muslims. I can’t go to most of their countries but in these last two weeks they came to me!” 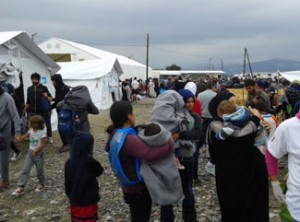 Hungary closed its border last week. Since then, migrants have turned toward Croatia in their effort to get to Germany and other European countries. By Friday, 17,000 migrants were stranded in Croatia.

“The churches in Serbia are helping too,” said Jim Puhr, a missionary with Christian Missions International. “Now churches in Croatia are getting involved in helping them. They are working hand in hand with the police and border protocols.”

Church planting organization SEND International started a refugee fund for relief efforts. “We feel we need to do our part to be the hands and feet of Jesus,” said Rex Durham, the group’s regional director for Europe. Durham said SEND also is working on long-term strategies and hopes the crisis will lead to church-planting opportunities among “unreached people groups” now in the heart of Europe.

— by Julia A. Seymour